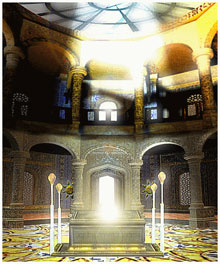 Known as the city of the sun, Elysium is the defender of the Western Lands and fierce allies with the dwarves of Monadh-Dach. Founded by Aten , God of Sun, Elysium's stands for all that is good and pure. As part of the Sun realm, Elysium is in direct conflict, with the forces of the Demonic realm.