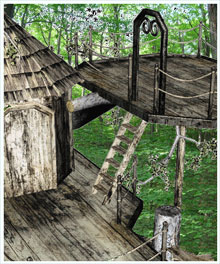 Ysallyra, home of the nomadic people of the forest and part of the mysterious shadow realm. Activities of the often elusive denizens are circulated by rumour, although few, if any, are accurate. Forged into a nation at the end of the dragon wars by Archion, the Shadow - Ysallyra has grown to be a force to be reckoned with.

The government of Ysallyra is formed by the election of Chieftans from among the populace of the Forest. Traditionally, each Chieftan will represent a different faction or tribe from within the Forest.